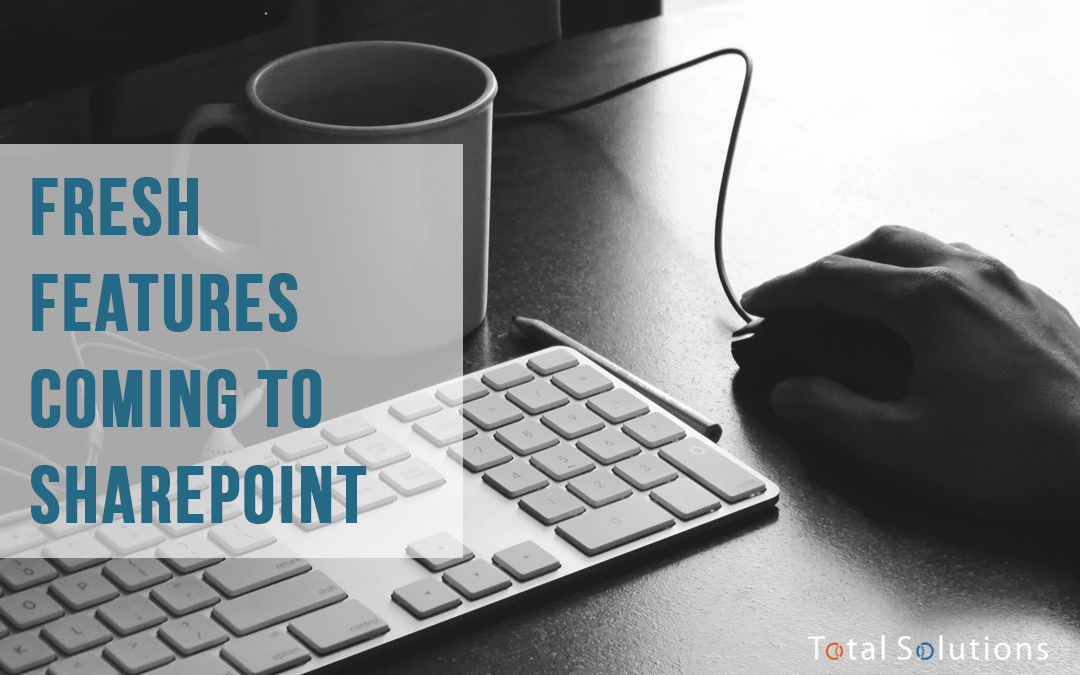 This article is an inside look at the future of SharePoint through the lens of Total Solutions Inc. If you missed the SharePoint Conference – North America, you can view the official website here. SharePoint Conference – North America wrapped up not too long ago, which highlighted the new innovations and updates coming for SharePoint Business Apps, such as Flow, Power BI, and Visio.  Additionally, new modern features and updates were also announced for SharePoint Content Services.  In case you’ve been busy, and haven’t had a chance to check out all the latest and greatest features coming to SharePoint Online and Office 365, I’ll walk through the overall roadmap, and dive deeper on a couple of new features I find interesting.  Freshen up that coffee (or steep some new tea) and join me as we learn more about the ever evolving SharePoint platform. 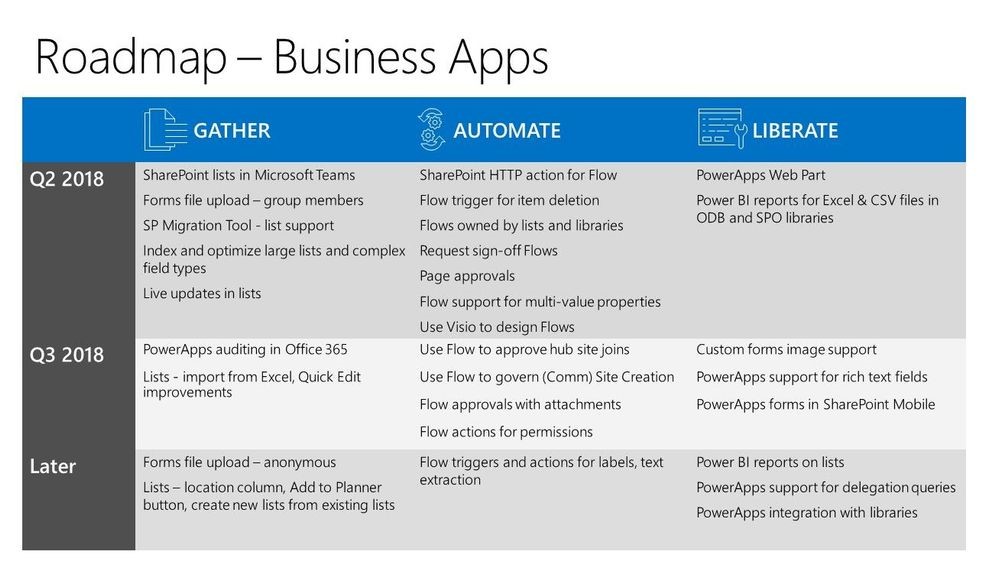 My big takeaway from the SharePoint Business Apps roadmap was the continued investment and integration by the Microsoft team of Flow and PowerApps into SharePoint Online.  If it’s been awhile since you evaluated using the Office 365 Business Apps, or you looked at these apps when they were first released and found them lacking, now would be a good time to dust these Business Apps off and see if you can leverage any to bring productivity gains to your business operations and end users! 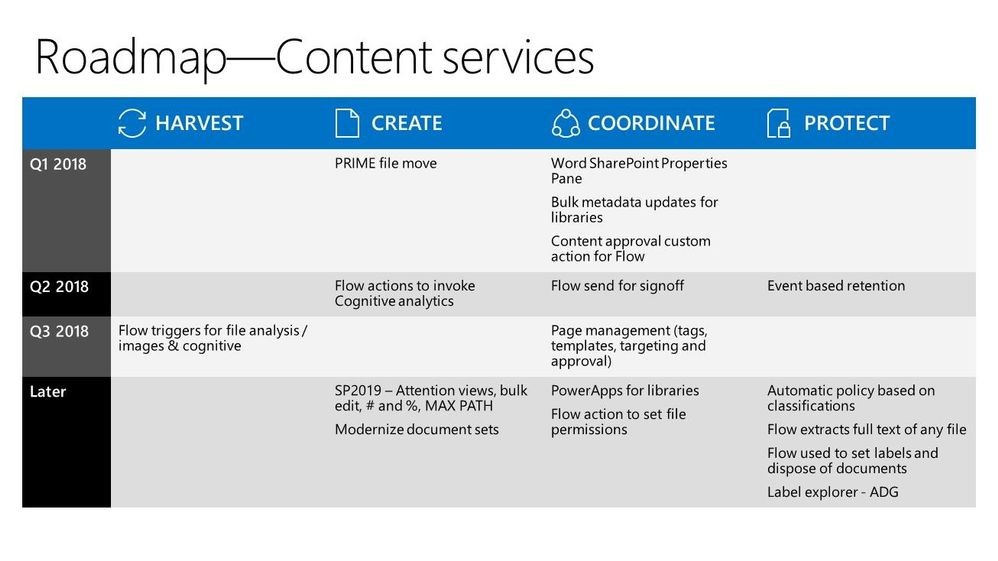 When I reviewed the content services roadmap, a few of the features jumped out at me, which I think are worth exploring in a little more detail.

One area to edit metadata for a document in SharePoint is within a document library.  However, for information workers, it is sometimes easier to have the metadata displayed and edited within the document itself.  Earlier versions of Word provided a way for those users to view and edit SharePoint metadata in a document.  However, in Word 2016, this capability was not originally provided, resulting in users continuing to rely on Word 2013.  The good news is that the ability to view and edit SharePoint metadata within a Word document has returned, and it’s now called the Word SharePoint Properties Pane.  If you are using an MSI-based installation, this is already available via the Microsoft Office 2016 update.  If you are running the Click-to-Run install of Word 2016, this feature currently being rolled out, so expect to see it in the next couple of weeks.  You’ll see it show up in the View tab of your Word 2016 client, and I’ve included a couple of screenshots to show what it looks like. 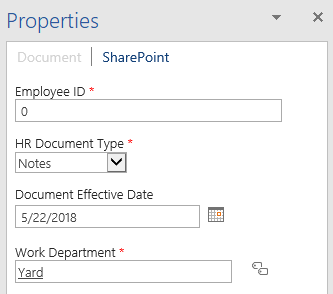 This was the first time I had run across Cognitive Services, and I’ll lead with the definition from the Microsoft Trust Center:

With Cognitive Services, developers can easily add intelligent features—such as emotion and sentiment detection, vision and speech recognition, knowledge, search, and language understanding—into their applications. The collection of APIs will continuously expand, adding new APIs and improving existing ones.”

I could write a whole series of blog posts on Cognitive Services, but I’ll focus on the Flow Integration points and some use cases. If you are interested in some of my other blog posts on SharePoint migrations, you can read about the 5 keys to migration success.

The Cognitive Services Text Analytics API can perform “Sentiment Analysis”.  Sentiment Analysis will return a score between 0 and 1, with scores close to 1 indicating positive sentiment, and scores close to 0 indicating negative sentiment.  The classifier input features include n-grams (a contiguous sequence of n items from a given sample of text), features generated from part-of-speech tags, and word embedding.  It is supported in a variety of languages.  The Text Analytics API can also return a list of strings denoting the key talking points in the input text (supported languages include English, German, Spanish and Japanese text).  It can also perform language detection, and detect all named entities in the text, such as organizations, people, and locations.  Below is a screenshot of a Flow template leveraging Cognitive Services Text Analytics and Translator Text API. 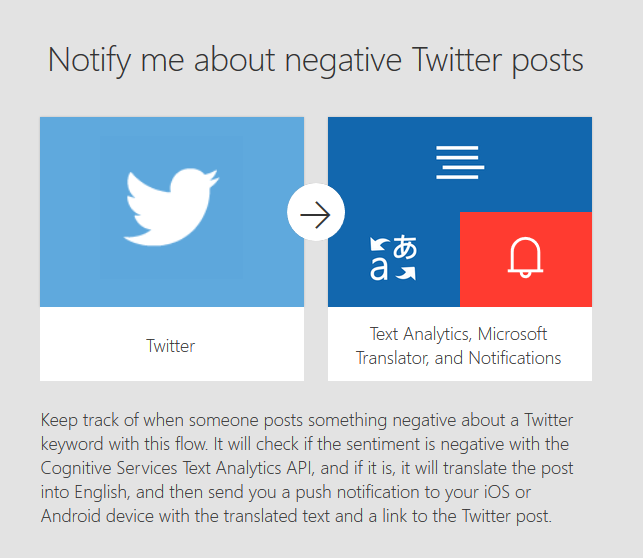 The Cognitive Services Video Indexer empowers you to turn video content into insights quickly.  This could include detecting spoken words, faces, characters and emotions.  These insights can be used to trigger other automated business processes.  Below is a screenshot of what the insights look like, and a Flow Template which leverages the Video Indexer. 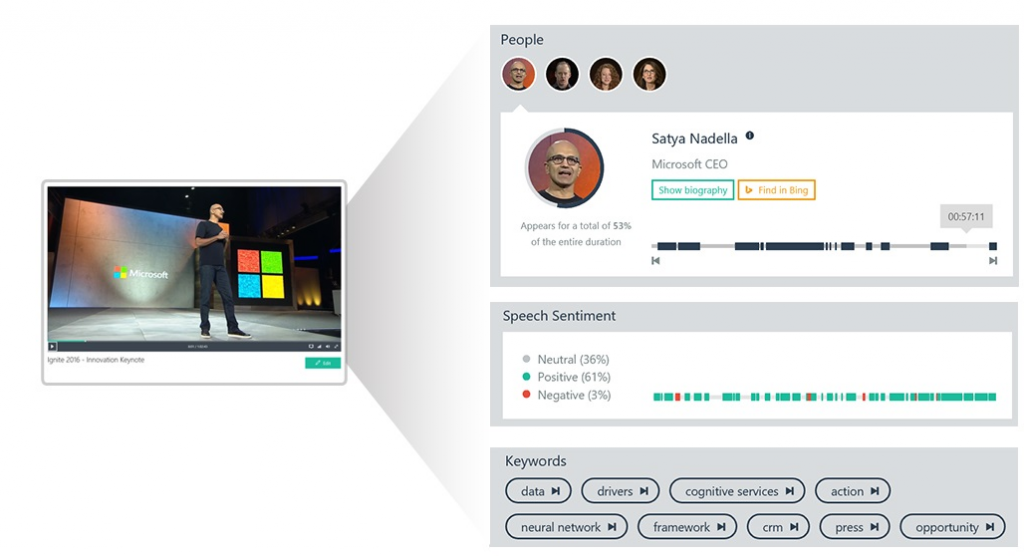 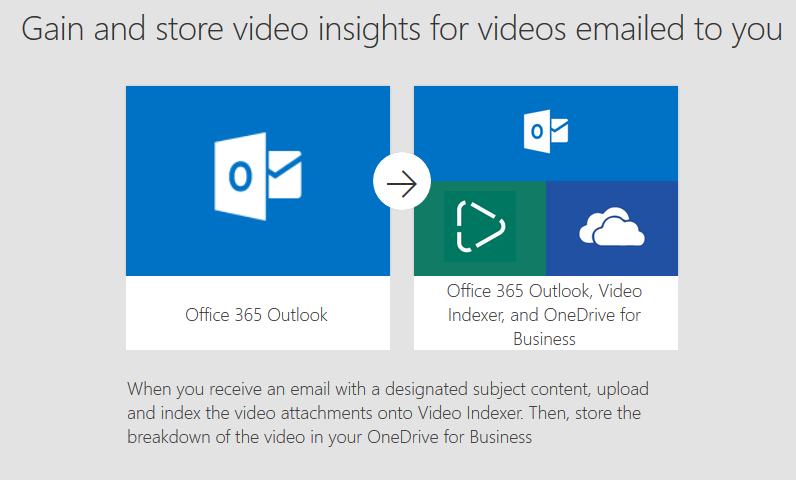 The Cognitive Services Computer Vision feature returns information about visual content found in an image.  It will return description and tagging keywords, identify color schemes and accents, detect and identify faces, all with a confidence score from 0 to 1, with scores closer to 1 indicated higher detection confidence.  There is also detection for adult/racy content, allowing for automated content moderation or flagging of content for moderators to review.  Below is sample output from the Computer Vision feature, and a Flow Template which leverages Computer Vision: 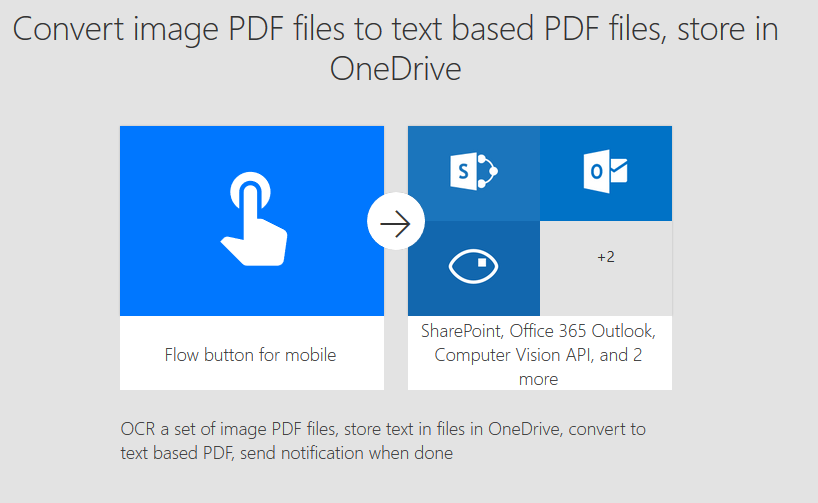 With the continual improvement in the Flow feature set, ever expanding set of connectors to other cloud based business applications, and the powerful set of features within Cognitive Services, there is fantastic opportunity to gain efficiencies across all job roles!  I could see this combination of features being used to suggest or auto-tag content as it is uploaded into SharePoint, or to take a first pass at classifying content migrated from a file share into Office 365.  I hope to have some more time in the future to explore Cognitive Services on a deeper level, after I’ve gotten some hands-on experience.  I have written on moving to the Microsoft Cloud many times, but Cognitive Services adds to the very long list of reasons to migrate to Microsoft 365.  I found the Cognitive Services site an extremely helpful resource to understand the diverse feature set, as well as see some of the features in action. If you are starting to think about planning your organizations’ journey to Microsoft 365, contact Total Solutions and we can start the conversation of how to get your organization there and what effort it would take.

Drew is a Senior Consultant at Total Solutions and is primarily responsible for overseeing all internal infrastructure and technology. Drew also works with clients planning strategic designs, performing SharePoint assessments, and automating processes. Drew is a graduate of Michigan State University, and in his free time enjoys the outdoors, watching and playing various sports, and the occasional video game.

Looking to Launch a SharePoint Intranet?